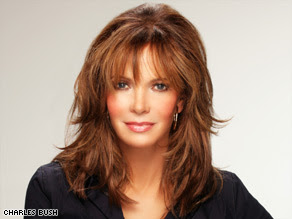 Jaclyn Smith
As her doctor gave her the diagnosis, "I was in a state of panic," she says. "It was kind of surreal, and you don't really hear what they're saying."

The lesson she learned that day: "Don't go it alone," she says. Her husband, Brad Allen, who was with her at the doctor's office, was better able to focus and ask questions about the best treatment options.

Smith says she remembers she did manage to ask one question: "I said, 'Am I going to be here for my children?' He said, '98 percent, yes.' "

Five years later, Smith is indeed here for her children. She's one of the 2.4 million women in the United States who've survived breast cancer, according to the National Cancer Institute. According to a report out this week from the American Cancer Society, the death rate from breast cancer went down 2.2 percent per year from 1990 to 2004.

This means more life for these women, and more wisdom from them about how to survive a cancer diagnosis. (Smith, for example, travels the country talking to women about breast cancer as a paid spokeswoman for drug company Eli Lilly). Here, from Smith, singer Olivia Newton-John, and gynecological oncologist Dr. Carolyn Runowicz, herself a breast cancer survivor, is advice that can come only from having been there.

Newton-John also found that her first instincts weren't always right. When her cancer was diagnosed in 1992, she was scared of having chemotherapy, and considered forgoing it and using alternative treatments, such as homeopathy and acupuncture instead.

"Common sense prevailed," said Newton-John. "One of my girlfriends said, 'Why would you want to risk even that one cancer cell? You have a child.' " She had chemotherapy after a modified radical mastectomy, and she says the chemo ended up not being nearly as bad as she'd feared.

When Newton-John got her diagnosis, she sat down to call her friends and tell them the bad news. Time was of the essence, since she knew a journalist was about to report erroneously that she was dying of cancer.

"The second friend I called burst into tears, and I thought, 'I don't need this,' " she says. "So I had a sister and friends make the calls. That way I could focus on positive thoughts, instead of on the illness."

"One of the most important things you can do is remember the power of girlfriends," Smith says. "Your family is there for you, but they get emotional. Girlfriends saved my day."

Smith says one friend who'd survived breast cancer was particularly helpful. "She'd been there and could say, 'Hey, look at me now. I'm on the other side of it.' "

Sometimes the girlfriends can be new friends. When Newton-John feared chemo, her oncologist put her in touch with other women who'd had the same treatment she'd be getting, and they helped her deal with her fears.

It's very likely a breast cancer patient will be called upon to make choices: lumpectomy vs. mastectomy, or choices between different types of chemotherapy.

"In the old days, we used to be paternalistic, and tell patients what to do," says Runowicz, the immediate past president of the American Cancer Society and director of the Neag Cancer Center at the University of Connecticut. "Now we lay out all the choices for the patients."

For example, Runowicz said it wasn't at all clear what type of chemotherapy she should have -- three doctors gave her three different recommendations.

To make choices, she says, patients need to know what type of tumor they have and how fast it's growing. She says a tumor that is estrogen positive, progesterone positive, and HER2 negative is the "best" kind to have -- tumors with those genetic characteristics tend to be the easiest to treat. And if it's spread to more than three lymph nodes, that's a sign you might need more aggressive treatment.

Runowicz: 'It's never an emergency'

Runowicz tells breast cancer patients they have more time than they think to plan out a treatment strategy. "The cancer has been there for years before it's detected," she says. "Emotionally you feel like you have to do everything tomorrow, and you don't."

Runowicz recommends taking some time to get a second (and maybe third) opinion on treatment options, especially if the original doctor was not at a major cancer center.

And when they start chemotherapy, she tells women to give up any notions of having a normal life. "Chemo is in charge of your life. You get sick and you get tired," she says. "You just have to say, 'this is a year of my life, and it's going to be a short year and a long life.' " E-mail to a friend

All About Breast Cancer