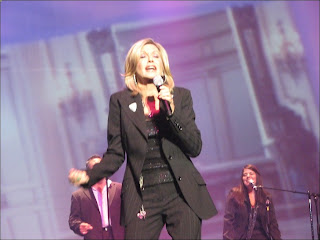 The British-born, Australian-raised singer and actor arrived in the Prairie city a day before her concert there and wanted a little dancing tune-up.

"We felt like dancing so we looked up a dance class on the Internet and found one, and had a really fun time," she told CTV Winnipeg. "I learned how to jive!"

Newton-John, 59, wanted to dance, but she didn't want attention. She didn't tell Ted Motyka who she was. "He doesn't know that we were there. We were just part of a gang," she said.

He found out Friday when CTV News told him.

"I was kind of stunned! It's a great, great honour to have her here," Motyka said.

"I thought the face was familiar, but you can't really tell unless you really put the thought to it," he said. "We were chatting after the class. They told me they were from California. But it never clicked because I had the next class right after that!"

Now he realizes he actually danced with John.

"She was kind of afraid of dancing a tango," he said.

"She was like, 'No, no. I don't know this. And I said, 'You'll see, you'll do very good'. And the first time, no problem whatsoever," Motyka said. "Big compliments to Olivia Newton-John for being so quick and such a wonderful student."

She only had the one lesson, but Motyka and his wife Margaret, also a dance instructor, hope John will return.

"Next time she should bring (John) Travolta, maybe show us a few moves from that movie," Margaret said, referring to Travolta's and Newton-John's 1978 musical mega-hit "Grease."

Added John: "It was great dancing with her, even if I didn't know it at the time."

Report from CTV Winnipeg's Jon Hendricks
Posted by DjPaulT at 12:42 AM