"SEE you at Mardi Gras."

Those were Olivia Newton-John's parting words to Heath Ledger's gay cowboy mate Adam Sutton as he farewelled the singer at her Malibu home at the weekend before returning home to his horses on the Central Coast, where he's hoping for some quiet time in the saddle after a surreal week in Los Angeles in the wake of Ledger's shocking death.
New pardners … Adam Sutton and Olivia Newton-John in LA.
After years of trying, Mardi Gras organisers have secured the services of the entertainment icon for the March 1 closing party as the festival marks its 30th anniversary. Newton-John is geared to deliver one of the campest Mardi Gras dawn shows yet with her exclusive gig. Discussions are continuing as to which of her hits Newton-John will sing, but there are promises of dozens of back-up dancers and a guarantee that everyone present will know the words.

Judging by her conversation with Sutton, all that remains is for the i's to be dotted and t's crossed on the contract. "She's definitely doing it," he says.

For Newton-John, the performance will seal her status as one of that select group of female singers whose age - she turns 60 in September - doesn't preclude adoration from a large gay fan base; Barbra Streisand, Cher, Bette Midler and Liza Minnelli are similarly well-loved. It will be Newton-John's first performance at a gay festival, suggesting that 30 years after tossing aside her good-girl image in the finale of Grease, she's doing it all over again.

If nothing else, it should help prepare TV viewers for her most radical makeover yet: Newton-John has just finished filming a TV series in which she reprises her role in the 2000 cult film Sordid Lives - playing a tattooed, lesbian, gum-chewing ex-con named Bitsy-Mae Harling.

Eat your heart out, Sandra Dee.

No one is happier about Newton-John's Mardi Gras gig than Sutton, who led last year's parade with Rupert Everett. The horseman bonded with Newton-John during a flying visit to LA that was supposed to be about promoting his participation in her Great Walk to Beijing charity event in April - but ended up consumed by the media hurricane that followed Ledger's death.

The Herald journalist Neil McMahon, the co-author of Sutton's memoir Say It Out Loud, reports that it was Newton-John's generous embrace that helped ease the blow for the 33-year-old from Cooranbong. Immediately under siege - Entertainment Tonight, Access Hollywood and People magazine were among those chasing him - Sutton had the blessing of the Ledger family to pay tribute to the actor, and used the platform given him to set an example. He announced that his planned donation of book royalties to Newton-John's cancer centre appeal would now be made in Ledger's name.

The same goes for all funds he raises for his Great Wall of China trek with Newton-John. "He's left me a legacy and I plan to use it," Sutton says. Newton-John is thrilled by the Ledger tribute, telling the cowboy: "It'll make him part of it."

Sutton is now back in Australia, but plans to fly to Perth to say a more private goodbye at Ledger's funeral. Then between Mardi Gras and China there will be more charity work.

As the public face of the ChillOut festival in Daylesford, Victoria, from March 7 to 10, he has waived all fees and expenses, asking that they be donated to the festival's chosen beneficiary, the Better Buddies anti-bullying program of the Allanah and Madeline Foundation. 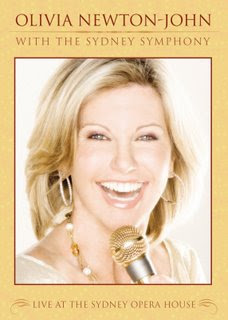 Olivia's LIVE FROM SYDNEY DVD has debuted on the Billboard DVD chart at #17. Another Top 20 hit for ONJ!

The tragic news from New York was too hard to bear for Ledger's cowboy mate, writes Neil McMahon in Los Angeles.

IN MANY ways he was Heath Ledger's worst nightmare: a nobody, allowed into the inner circle, who then told the world his story and became a somebody. Ledger hated the spotlight, especially when it was uninvited, and Adam Sutton worried about that, lost too much sleep about what his mate would think. Then, when he asked for the actor's blessing, he got a graceful nod. Go ahead, said Ledger to the real gay cowboy. "I'm proud of you, Bushy."

Sutton, 33, was proud, too. Proud of how he'd told his tale, first in the Herald, then on TV, then in a book, and proud that an actor renowned for his aversion to publicity had looked at what he was trying to do and told him it was all OK. Yesterday, though, he was simply shattered. He was in Los Angeles when word came through. Ledger was dead. A burst of text messages. "So sorry to hear about Heath. Hope you're OK."

He was standing in Olivia Newton-John's Malibu garden, a quick visit for a publicity shot for a charity event he is doing in April. Next door lives Mel Gibson, Ledger's co-star in The Patriot; Sutton had met Gibson on Sunday at a Hollywood cricket game, given him a copy of his memoir, Say It Out Loud, the book the Central Coast horseman had used to describe a life reflected in the script of Ledger's most acclaimed film, Brokeback Mountain.

Heath would be at home here, Sutton thought, stars to the left and right, but it was foreign to him. Truth be told, it probably wouldn't have been much more of a comfortable setting for Ledger, the star who resisted the sparkle at all costs. "He didn't want to be a blockbuster person. He was an actor, not a celebrity," Sutton said last night.

Sutton and Ledger had met on Ned Kelly; where the wrangler from Cooranbong gave the burgeoning star riding lessons. There was a mild tempest that first day, when film-set novice Sutton ordered his celebrity charges to don helmets. They refused, and an actors' walk-off was barely averted. The pair nevertheless became mates. A year later, Ledger was handed a script and brought it back to Sydney on his summer break. As they got ready to go out on New Year's Eve, he said casually to his mate: "I've just read this script and it sounds a lot like you."

It was Brokeback Mountain. Ledger used the film to tell the world just how well he could act; Sutton used the film's profile as a platform to tell his own story.

Hollywood was a new thing. He'd been here only three days, a last-minute visit as part of G'day USA Week to help Newton-John promote her cancer centre appeal. Ledger was his Hollywood connection, but that was about them being mates, not celebrities. Yet here yesterday was the cowboy, a fish out of water, at home with the one household name in the zip code who would surely understand. Newton-John knows something about handling grief, publicly and privately. No one else knew what to say, but she didn't hesitate, stepping forward to hug Sutton, who had held it in until then. "I'm so, so sorry," she told him, a spontaneous embrace defeating country stoicism.

Newton-John's home is built for peace and calm, in parts quite purposefully for lifting the spirits of a woman who has endured everything from breast cancer to the unexplained loss three years ago of her partner, Patrick McDermott. The rear is dominated by a labyrinth, a meditation maze for wandering and reflection. She suggested Sutton take a walk there and find the centre. There he found stones, under each one a word. Friendship. Harmony. Love. Understanding. Acceptance.

It helped. "It was as close as I could imagine to being with my mother," said Sutton later, who had only met Newton-John once before. Now he was speaking as a bewildered and tearful young man cast in the difficult role of a public figure whose flare was sparked by the flint of another man's fame, that man now deceased.

The world was on the phone. Entertainment Tonight; Access Hollywood, morning television in Australia, radio stations everywhere, journalists wanting to know about this: the real Heath.

Sutton wasn't sure he or anyone beyond family was qualified to speak on that, and knew he wasn't ready on the scale now demanded. A flood of tears came first; a stiff drink was proffered and accepted. As Sutton went wandering, Newton-John reflected on her own experience. "He doesn't have to say anything if he doesn't want to," she said firmly, aware of the relentless pressure to simply react. "It's nobody's business."

She also knows something of young talent burning too brightly, too young. There was Karen Carpenter, a friend whose death tore her. Then Andy Gibb, another young Australian who conquered Hollywood and was gone at 30. Gibb had found himself with few places to turn, taking his troubles to Newton-John, his friend and sometime duet partner. "He used to call me in the middle of the night," Newton-John said of the youngest Gibb brother, destroyed by drugs in 1988.

He found himself in the wisest hands, and is grateful, yet Sutton doesn't know what to think. The story from New York remains murky, and having refused to tread on Ledger's private life in his book, it is territory he will not venture into now. "All I can say about him is that he was an inspiration to me. He gave me the strength to find myself and tell my story, and that's something that I know helped a lot of other people. All I want to do now is carry it on as his legacy."

Herald journalist Neil McMahon is the co-author of Adam Sutton's memoir Say It Out Loud: Journey Of A Real Cowboy.

Vote For Olivia Newton-John For The Hit Parade Hall of Fame-2008! 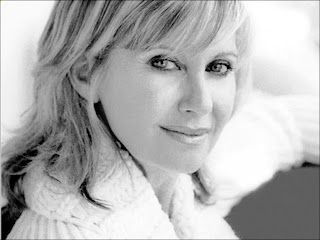 Please vote for Olivia for the Hit Parade Hall of Fame.Go to http://hitparadehalloffame.org/2008/2008ArtistNominations.html
So far,she only has a small,paltry 451 votes.
While Olivia getting inducted into the Rock & Roll Hall OF Fame may be questionable,this one should be MUCH easier as actual fans can vote her in!
Posted by DjPaulT at 12:44 PM 1 comments

Olivia talks about John Travolta, John Easterling, and G'Day USA. The Jan. 19 event was held at the Waldorf Astoria Hotel with a red carpet arrival, The event was sold out. Below is some of the TV coverage of the event. Thank You to http://olivianewton-john.com/

The Insider G'Day USA Coverage
Posted by DjPaulT at 11:33 AM 1 comments

UPDATE
Hi everyone well the move into my new place is over and I am finally starting to get settled in, everything went pretty smoothly. Thank you to all of you who sent such nice comments I really appreciate them. Now it's back to the music. 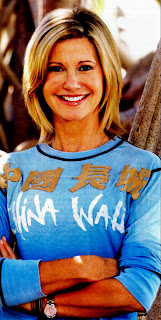 Olivia is thrilled to be recording a duet with Australian pop star and friend, Delta Goodrem early next year. The two will write and record a song with Canadian producer Amy Sky in February. The song will be the theme for Olivia's planned walk on the Great Wall of China in April to raise money for cancer research and the Olivia Newton-John Cancer Center. Rumours swept around that fellow Aussie, Kylie Minogue, would record a duet with Goodrem to promote the Walk however, this is not true. Just to set the record straight!! Olivia is excited about working with Delta and of course, to start training for the Walk in April. For more info about the Great Walk to Beijing visit www.GreatWalkToBeijing.com
Posted by DjPaulT at 2:09 PM 1 comments