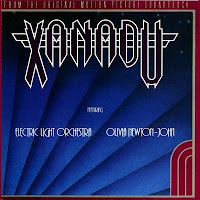 This is the original promotional video that was used on MTV and VH1. "Xanadu" is the title song from the album Xanadu, the soundtrack to the 1980 film of the same name. The song is performed by the Electric Light Orchestra and Olivia Newton-John. Newton-John sings the primary vocals, with ELO adding "parenthetic" vocals in the style of their other songs on the "Xanadu" soundtrack, along with providing the instrumentation. "Xanadu" reached #8 on the US Billboard Hot 100 singles chart in 1980. 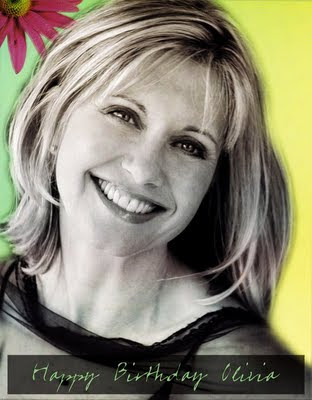 Happy Birthday Olivia, thank you for that you have given me and the world.
Posted by DjPaulT at 11:15 AM 1 comments 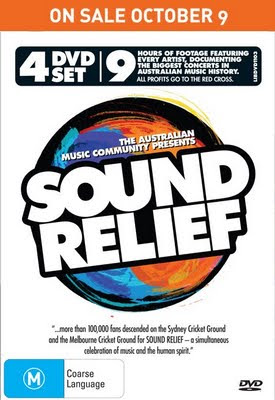 On October 9 the 4 DVD set of the Sound Relief Concert will be released in Australia. The concert took place simultaneously in Sydney and Melbourne, March 14, 2009. The DVD will contain over 9 hours of concert footage featuring Australian and international artists. Next Sunday Australian Channel 9 will rebroadcast a 1 hour special of the best moments from the concerts.

Olivia Newton-John was Barry Gibb's special guest for his portion of the concert, they performed several songs together including "Islands In The Stream" among others. Below is Olivia & Barry Gibb's traclist that will be included on the DVD. 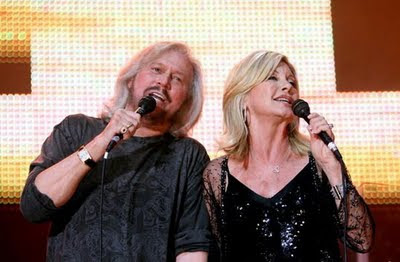 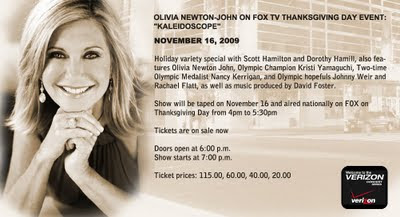 Television will be transformed this Thanksgiving Day into a celebration of Skating, Song and Survivorship with the debut of "Kaleidoscope" - a holiday variety special featuring Olympic skating champions and GRAMMY Award-winning music artists. The show will feature the historic return to the ice of the legendary Scott Hamilton in his first television performance since being diagnosed with a brain tumor five years ago. Hamilton and Dorothy Hamill will skate to the music of fellow cancer survivor Olivia Newton-John and one of America's foremost music producers David Foster. Also performing are Olympic Champion Kristi Yamaguchi, two-time Olympic Medalist Nancy Kerrigan and Olympic figure skating hopefuls Johnny Weir and Rachael Flatt.

"Kaleidoscope" is a program designed to recognize women and the key role they play in the battle against cancer - as patients, caregivers, and advocates. Its mission is to address issues surrounding women and cancer by helping educate women to be proactive with their health and by honoring all cancer survivors, including the more than 713,000* women who are diagnosed with cancer each year in the United States. This effort is being supported by an unprecedented collaboration with 10 nationwide advocacy partners including: American Society of Clinical Oncology (ASCO), Breast Cancer Network of Strength (BCNS), C3: Colorectal Cancer Coalition (C3), Gynecologic Cancer Foundation (GCF), The Leukemia & Lymphoma Society (LLS), Lung Cancer Alliance (LCA), National Coalition for Cancer Survivorship (NCCS), Oncology Nursing Society (ONS), Ovarian Cancer National Alliance (OCNA) and the Prevent Cancer Foundation (PCF).

"As a cancer survivor, I would not have missed the opportunity to perform in 'Kaleidoscope,' which is an amazing initiative that provides a unique opportunity to help women understand cancer and how to be prepared when dealing with their health. David [Foster] and I are looking forward to performing a very powerful and moving piece of music to honor cancer survivors and motivate women to be proactive in taking care of themselves," said Newton-John.

The albums to be released are as follows:

The high quality SHM-CD (Super High Material CD) format features enhanced audio quality through the use of a special polycarbonate plastic. Using a process developed by JVC and Universal Music Japan discovered through the joint companies' research into LCD display manufacturing, SHM-CDs feature improved transparency on the data side of the disc, allowing for more accurate reading of CD data by the CD player laser head. SHM-CD format CDs are fully compatible with standard CD players. Experience the high-fidelity audio quality of the SHM-CD format!

With all the work being done to upgrade CD materials these days, it’s no wonder Universal/JVC would actually discover a new material that really does something…a big something at that! SHM-CD, or Super High Material CD, is an improved version of the Compact Disc material that uses super quality, enhanced transparency polycarbonate material developed for use in LCD screens. They will play in any CD player. Universal Music Japan and JVC co-developed the SHM-CD. They report that the new material allows the pits to be formed more precisely plus eliminates laser splatter. The signal characteristics are improved as a result with overall lower distortion and better musicality. Universal Japan is reissuing a ton of albums in their catalog in all genres as SHM-CDs and this is the first report of their CDs to reach these shores!

Eastwind Imports sent me a two disc Jazz Sampler with one CD made of regular aluminum and the other an SHM-CD. Made from the same masters (newly re-mastered in Japan without any use of equalizers or compressors) and pressed with the same stamper, they sound very different. Taken from the vast catalog of Universal which includes Verve and Impulse labels, each CD contains 13 famous jazz numbers recorded in the 1950s, 1960s and 1970s. The artists include John Coltrane, Stan Getz, Oscar Peterson, and Anita O'Day.

I first listened to the regular CD supplied, focusing on Stan Getz/Joao Gilberto "Corcovado." It sounded quite smooth and focused with very good definition and depth. I then played the Verve 20 Bit CD Reissue from 1997 which sounded a tad brighter, but that’s about it. I then listened to the SACD Verve Reissue from 2002 on my ModWright 9100 with tube power supply …it was improved in every way. It was SACD of course, but it had substantially more definition and air …better depth, too. It was then I played the SHM-CD of this cut. Oh boy, it sounds like the SACD!

What? How could this be? A CD formulation that actually works? I tried the SHM-CD on all my CD sources: ModWright Sony 9100, 999, E.A.R. Acute Tube CD Player, and Alesis Masterlink. I heard improvement on ALL players with the SHM-CD versus the regular editions.

I heard more definition, more air, smoother textures and nuances, a lot more depth, reduced digititus of all types, more of an analog sound and feel, bigger dynamics micro and macro …the whole ball of wax. I put some L’Art du Son on the SHM-CD for even better results.

Will I replace all my CDs with SHM-CDs? Probably not. But, I will look for Universal releases I don’t have in this format for sure! It closes the gap by 80-90% between CDs and SACDs on top audiophile machines and this is quite an achievement. Compatibility appears perfect, too. The sound just pops with a sense of reality I rarely hear from CDs or SACDs for that matter. Harmonious sounding CDs…how very nice!

WHAT IS A MINI LP'S

A mini LP is a CD version of something that was originally released as a 12" (12 inch) vinyl LP.

They are also known as LP replicas as they tend to exactly replicate the original packaging of the first vinyl release.

In many cases the packaging is superior to, or at least more elaborate than the majority of vinyl releases. The reason being that many follow-up vinyl releases were inferior to the first vinyl release (or at least lacked some of the extras found in the first release - such as postcards, posters, lyric sheets etc).

They are often refered to as "cardboard sleeves" and "paper sleeves" being made exlusively from paper or cardboard (other than the CD of course). Other names and abbreviations include: "jpn lp sleeve cd" and "kami-jacket". (The last of these I guess is an indication that they are held in high esteem by many who collect them.)


WHAT IS AN OBI STRIP?

It is the small piece of paper included with a CD or LP usually wrapped around the left hand spine of the item.

An obi strip is, for all intents and purposes, a disposable item. It provides information to the seller and to the buyer (mostly in Japanese) about the item being sold. Once the item has been sold to the consumer it is basically useless (it has served its purpose).

To non-Japanese reading buyers, the dates on the obi provide an indication of when the item was made or became available.
Posted by DjPaulT at 10:27 PM 3 comments

Olivia and John will be in the UK promoting their seminars on the Amazon Rainforest awareness, ZAMU and Prince Charles' "The Prince's Rainforest Project" (www.RainforestSOS.org). Below are TV, radio and print interviews to look for:

In addition, look for interviews in the Sunday Express and more...

For information about ZAMU in the UK, click here.

"Christmas Wish" to be released by EMI
in Canada and US

This holiday season Olivia's acclaimed Christmas CD, "Christmas Wish," will receive wide release through EMI distribution in Canada and the US.

The Canadian release is tentatively set for September 29th.

The U.S. release is tentatively set for October 20th.

Liz Smith of the NY Post called 'Christmas Wish' a "favorite - a beauty!" and Carol Swanson of christmasreview.com reviewed the disc saying this is "a generous helping of richly crafted pop pleasures for the holidays."

In The Studio…David Foster and Olivia Newton-John! 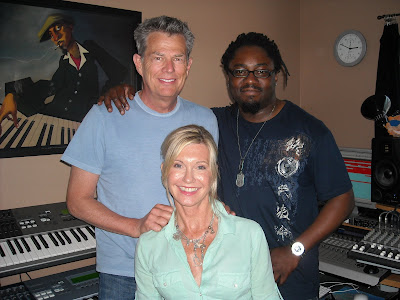 Olivia recently collaborated in the recording studio with celebrated producer/songwriter David Foster on material for an upcoming project.

Check back here for news and details on the future project.

Great Walk To Beijing Documentary to Air
In Australia

Olivia and some of her team of walkers (Dannii Minogue, Sir Cliff Richard and others) - who joined her on the Great Walk to Beijing to fundraise for her cancer and wellness centre appeal - will be on a TV Special that shows highlights of the Great Walk.

It includes never before seen footage of Olivia, with a very special interview of the singer and her high-profile walkers; and the everyday cancer survivors who trekked with Olivia across 228 kilometres of the Great Wall of of China over 23 days for the cancer appeal. 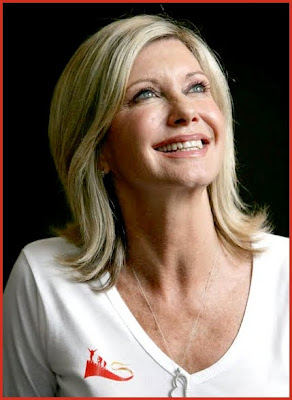