Olivia Newton-John 'Gets Physical' as the Newest Spokesperson for Total Gym. 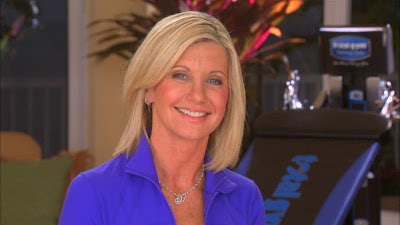 The Total Gym® (www.totalgymdirect.com), a recognized leader in personal home fitness, announced today Olivia Newton-John as the newest celebrity client spokesperson. An inspiration to many, Newton-John is a multi Award-winning singer-songwriter and actress as well as breast cancer survivor and advocate.

At 60 years old, Newton-John had a goal in mind to trim up a few pounds and inches and learned that the Total Gym lives up to its name. “Total Gym is the perfect name for the machine because I can do everything,” notes Newton-John. “It offers cardio, stretch and strength training all on one machine in as little as 6 to 8 minutes a day, making workouts more efficient and effective.”

“If you want to make a change in life – whether it’s to lose weight, whether it’s to get strong, whether it’s to just lean out – whatever you want to do, the Total Gym can satisfy all of those things,” continued Newton-John. “I look at myself now and I go - wow you really did it! People have said to me ‘you’re looking good’ and I say yeah, I’ve been working out with the Total Gym.” Newton-John joins other internationally-renowned spokespeople leveraging the complete success of Total Gym including: super-model Christie Brinkley; actors Chuck Norris and Wesley Snipes; gold-medal winner Evan Lysacek; professional dancer Anna Trebunskaya; and professional football player Kellen Winslow Jr.

Christie Brinkley shares, “Olivia Newton-John landed the lead role in the movie GREASE and she went on to win just about every kind of music award you can think of; and when it comes to looking and feeling younger, her secret weapon is the same as mine...the Total Gym.”

The Total Gym, www.totalgymdirect.com, is the ultimate workout machine utilizing an individual’s own body weight as resistance to perform any exercise and incorporate the use of multiple muscle groups together in any plane of movement. Founded in 1974 for commercial rehabilitation, Total Gym entered the consumer “home fitness” market in 1996 with the airing of its first television infomercial featuring long-time user Chuck Norris and co-host Christie Brinkley. The Total Gym infomercial is one of the industry’s longest-running and most successful; broadcast to 85 countries and credited with sales of over four million units worldwide.