Olivia Newton-John speaks out about "fracking" Olivia Newton-John has spoken out on the issue of "fracking" - the process involves pumping a large volume of water mixed with sand and chemicals into rock to create frissures that allow trapped natural gas to be released.

In her open letter, Newton-John says she is "horrified to learn of the extensive plans for coal-seam gas and shale gas exploration in Australia".

"The public's awareness as to what is happening, and the potential consequences to our health and our land, shows that it's time for some serious inquiries," the singer wrote.

"Many of my friends and family were not even aware of what was going on until they heard from me," she said.

While there is a moratorium on fracking in NSW until the end of the year, the industry is set to become a significant contributor to the state's energy supply, with companies undertaking appraisals in Gunnedah and the Clarence-Moreton basins, home to Newton-John's Gaia Retreat.

The star is demanding to know evidence that coal-seam gas mining does not pollute drinking water, what chemicals are being used in fracking and why companies are exempt from revealing them.

"Until these questions are answered, I respectfully request a moratorium on the coal-seam gas exploration and mining in Australia until all risks have been fully explored," she said.


The video shows Chloe appearing to snort a powdery substance, lying in a bed with slit wrists and holding a gun to her head. After the death of Amy Winehouse, the project has been steeped in controversy.

"It's so funny - I don't think I went that far," said Chloe. "It was a metaphor for what I was going through, so I wasn't like, 'Yeah I want to slit my wrist or put some electrical devices in a bathtub.' It was just about being in a lot of pain and dying inside in front of the one you love and them not noticing what you're going through."

Thirty years after the release of her smash “Physical,” Olivia Newton-John is still going strong and captivating fans. The iconic singer pays tribute to her favorite female vocalists, recalls the gay couples in her groundbreaking video, and tells why she’s excited about marriage equality.
By Jeremy Kinser 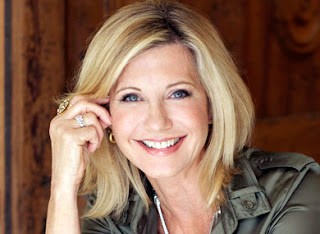 In 1978, Olivia Newton-John accomplished one of the most impressive image makeovers in entertainment history. The singer who had been a top-selling vocalist for much of the decade tweaked her wholesome public image by transforming from clean-cut to leather-clad Sandy in the mega-musical Grease and three years later completed the conversion with her provocative, record-breaking hit “Physical.” The pop superstar has continued to evolve not just professionally but personally as an advocate for animal rights, environmental conservation (along with her husband, natural health businessman John Easterling), and following a battle with breast cancer, as a spokeswoman for early detection and awareness. She also co-owns Gaia, a world-class retreat and spa featured on one of the final episodes of Oprah last winter.

Now the singer returns to the spotlight with Portraits: A Tribute to Great Women of Song, an album of covers that was recorded in 2004 but has just been released in the United States. Newton-John wraps her lilting soprano around eleven classics originally sung by Karen Carpenter, Doris Day, Minnie Riperton, Dionne Warwick, and other notable female vocalists. The versatile entertainer, whose acting résumé also includes a pair of cult films, Xanadu and Sordid Lives, will return to movie screens early next year. In A Few Best Men, a raucous wedding-themed comedy from Stephan (The Adventures of Priscilla, Queen of the Desert) Elliott, she’ll play the mother of the bride, a role she’s also preparing for in real life with her daughter, singer Chloe Lattanzi, who’s planning an October wedding. Newton-John, a cancer survivor of nearly two decades, is also passionate about the forthcoming Olivia Newton-John Cancer and Wellness Center. She has also released a new dance remix of her 1980 hit “Magic” with all proceeds from the download will help fund the building of the center in Melbourne, Australia. The beloved Aussie, who recently performed at New York Pride's Bondi Beach event, speaks with The Advocate about her latest projects, her state-of-the-art cancer and wellness center, and why she's a proponent of marriage equality.


The Advocate: On Portraits you sing songs associated with other female vocalists. How did you decide which songs to include on the album?
Olivia Newton-John: They are all women whom I’ve admired and songs I’ve sung during my career and while growing up. I just wanted to honor those ladies.

The album includes a gorgeous cover of the Carpenters’ “Rainy Days and Mondays.” You and Karen were close friends, and it’s been nearly 30 years since she passed away. What’s something about her most people don’t know?
She was a very good friend. She was a lovely girl and a lot of fun. I think most people don’t know how much she loved Mickey Mouse and Disneyland. She lived [nearby] and loved to go there. She had Mickey Mouses and photos of the Disney characters in her house. She wore T-shirts with Mickey’s face on it. She loved all of that. She was a kid, a big kid. She was a lot of fun and had the most amazing voice. I was such a fan of hers. She was a great girl and I do miss her. 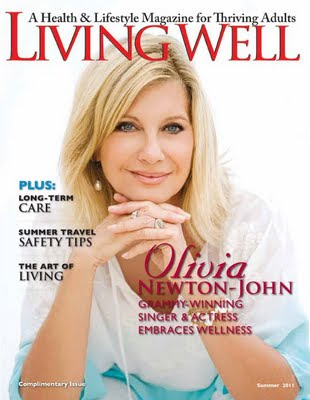 To maintain longevity in the entertainment industry, true stars needn’t rely on gimmicks and outrageous antics.

Just ask Olivia Newton-John, who has let her voice do the singing and her heart do the leading during an illustrious career that’s spanned more than four decades.

The 62-year-old vocalist and actress still dazzles audiences with her soulful music, but it’s her multi-faceted work behind the scenes that has taken center stage in her life, a spot she’s now happily sharing with her new husband, Amazon Herb Company founder John Easterling.

Check out Olivia's interview in the latest issue of Living Well Magazine.
Posted by DjPaulT at 10:11 PM 0 comments

Olivia Newton-John HAS HAD one of the longest, MOST and MOST Celebrated Successful careers in music in the history of the world. She Has year upcoming film, "A Few Best Men," Which is scheduled to Be Released in 2012, and the singer Performed at New York City's Gay Pride Event at Bondi Beach in June 2011. She's Often Kept Consistently a busy schedule, delighting Her fans for decades. Yet, how much do you really know about this iconic star? Here are Some Things That Are Known lesser about Olivia.

Aside from being one of the most successful formats in the histories of recorded music and commercial radio, our AC chart is home to hall of famers, big-betters and hard rockers. Home to soulful sweethearts and songwriting superstars. AC isn't a place songs go to die. As radio folks, songwriters and fans well know - AC is the place where stars go to live forever.

See the entire survey on Billboard.com 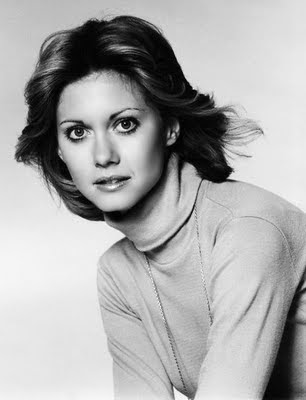 Chloe Rose Lattanzi (born January 17, 1986) is an American singer and actress. She was born in Los Angeles to actress and singer Olivia Newton-John. Her father is actor Matt Lattanzi. Her maternal great-grandfather is Nobel prize-winning physicist Max Born. Here's the video to her song 'Play With Me'. The video is derected by Olivia's step son Mikey Easterling.

If you thought that the clip to her, er, electro-heavy jam would be laden with imagery featuring rotting skin, drug taking, guns, domestic violence, slitting wrists, toasters in the bath and a WTF beginning with a guy taking a dump...well gosh, you've probably seen it then.

The new track is from Chloe's forthcoming CD

(WARNING: In all seriousness, there is some truly distressing imagery here. It features graphic images of self harm, violence and is not recommended for the squeamish. Nor similarly distressed.) 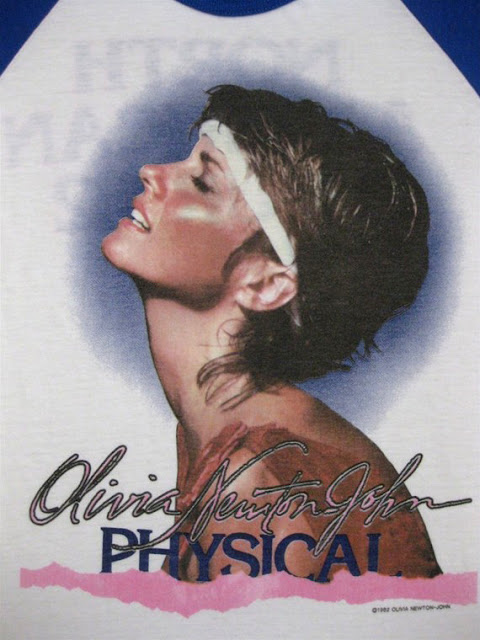 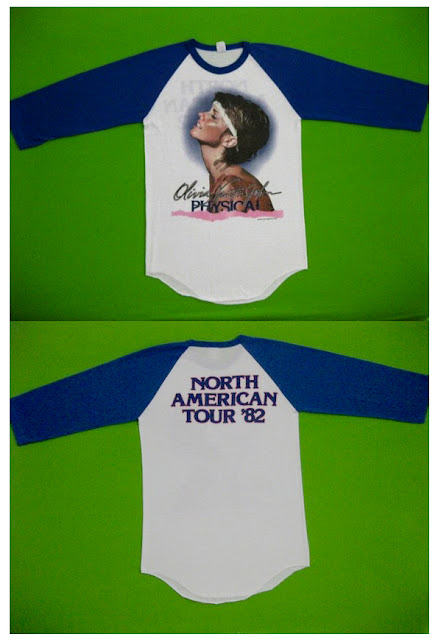 Olivia Newton-John - The Best Of My Love (Remixes) 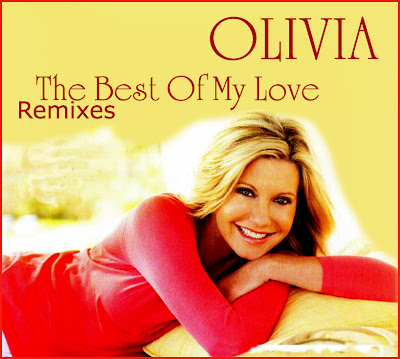 I had originally posted this release in November, 2007 and after many requests I am re-posting it with an additional new 2011 remix by "Vision Mixer" we havn't seen a new Olivia remix from him in quite a while and this one is fabulous!

"The Best Of My Love" and "Broken Wings" are two unreleased dance tracks produced by Melbourne Australian music producer, songwriter and club runner Brett 'Goofyfoot' Goldsmith who is also Olivia's nephew. The booty-shakin’ house remix of "Best of My Love" is by Melbourne-based UK producer Ashley Cadell. The funky electro version of the 80's classic "Broken Wings", and the house styled "The Best Of My Love", were both supposed to be on a new Olivia dance album, which so far has been put on hold.

The two tracks remain unreleased on any of Olivia's albums, and were only released via the internet for download. Olivia says the dance album is still going to be released. The album, when completed, will be an electronic/pop journey that hears "Livvy's" vocal reach new audiences. And also may contain some remixes of her classics. Included here are also great remixes by WLB and Bucabeach. 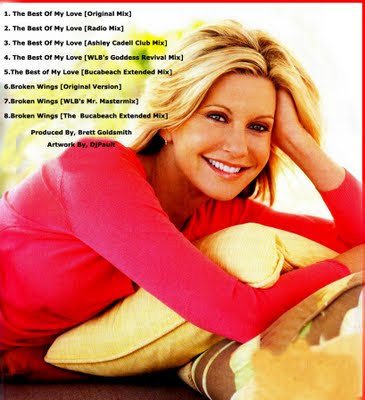