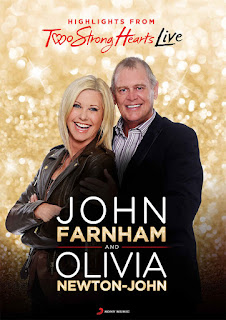 ARIA Albums: John Farnham And Olivia Newton-John Have No 1 Album For 2nd Week
by GAVIN RYAN on JULY 11, 2015
in NEW MUSIC,NEWS,NOISE PRO

Holding for a second week at the top of the ARIA Albums chart are John Farnham and Olivia Newton-John with their collaboration album “Two Strong Hearts”, matching the two weeks that their previous No.1 together “The Main Event: Highlights” achieved back in December 1998.


With both acts staying at the top it increases their tallies of weeks at the albums summit, John moves up to 48 accumulated weeks at No.1 (third overall) and Olivia climbs to twelve weeks in total moving her from 52nd to equal 47th on that listing alongside other twelve-weeks-at-No.1 acts like Red Hot Chili Peppers (5 #1’s), Billy Joel, Pink Floyd and Robbie Williams (4 #1’s) and Meat Loaf (2 #1’s).

The entire Top 3 albums all hold steady this week, with “Title” for Meghan Trainor at No.2 and “x” for Ed Sheeran at No.3, whilst “1989” for Taylor Swift is back up two places to No.4, which pushes Florence + the Machine down a place to No.5 with “How Big, How Blue, How Beautiful” which is now Gold (●) in sales and down a place to No.6 is “Empires” for Hillsong United and back up two places to No.7 is Sam Smith and his “In the Lonely Hour” album, meaning that the top seven albums are all current or former No.1 albums.

US Rn’B singer Miguel sees his third album “Wildheart” score the highest new entry of the week, as his second chart entry here comes in at No.8, surpassing the No.45 peak his second set “Kaleidoscope Dream” achieved in September 2013. Returning to the Top 10, up five spots to No.9 is another former No.1 album, “Wilder Mind” by Mumford and Sons and the second album debuting in the Top 10 this week is third studio album for Melbourne act The Getaway Plan entitled “Dark Horses”, which is now their first Top 10 and highest charting album as they previously entered with “Other Voices, Other Rooms” (HP-14, Feb 2008) and “Requiem” (HP-17, Nov 2011).

UP: With a new Top 5 single for Sia via Travie McCoy, her album “1000 Forms of Fear” is back up five to No.13 and with the movie ‘Frozen’ now under $15 on DVD and the school holidays in full swing around the country, the soundtrack is back up six to No.15 whilst “Chaos & the Calm” for James Bay rises back up six to No.17. Two further soundtracks rising back up are “Guardians of the Galaxy” (35 to 21) and “Furious 7” (30 to 22, now Gold (●) in sales) whilst the second half of the Alberts documentary screened last weekend focusing more on their 70’s and 80’s period including the rise of AC/DC, which helps the acts current album “Rock or Bust” to leap up thirty-six places to No.24. “The Very Best” for INXS is back up nine to No.25, “Walking Under Stars” by The Hilltop Hoods rises back up eleven to No.26 thanks to a re-packaging and Kendrick Lamar is back up twelve to No.27 with his former No.1 “To Pimp a Butterfly”. The ’50 Shades of Grey’ soundtrack climbs up thirteen to No.29 and blasting back up fifty-nine spots to No.32 are Alabama Shakes with “Sound & Color” thanks to their performances in Perth at ‘T in the Park’ festival. Ed Sheeran is back up ten places to No.36 with “+” and re-entering the Top 100 at No.38 (although it is now a trimmed down single CD edition) is the David Bowie collection “Nothing Has Changed: The Best of”, and further returning albums to the Top 50 include “Sweet Talker” for Jessie J (83 to 46), “Spirit of the ANZACS” by Lee Kernaghan (59 to 48) and “My Love is Cool” for Wolf Alice (58 to 50).

Other than the two Top 10 debuts there is only one more entry to the Top 50 this week, coming in at No.23 is Neil Young + Promise of the Real with “The Monsanto Years” which features the sons of Willie Nelson, Lukas and Micah along with their band Promise of the Real, the songs on the album are mostly criticizing agri-business Monsanto.

Lower 50: With a second Top 10 single from the album this week, Galantis is up twelve places to a new peak of No.52 with their debut album “Pharmacy” and back up eight to No.53 is the “Greatest Hits” set for Queen, with the Guns N’ Roses G.H. album rising back up nine to No.54. twenty-one pilots fly back up twenty-three places to No.59 with “Blurryface” and the Nirvana album “Nevermind” is back up ten to No.61. George Ezra jumps back up twenty-seven spots to No.63 with “Wanted on Voyage” and returning at No.65 is the Blur album “The Magic Whip” and back in at No.68 is the Paul Kelly set “The Merri Soul Sessions” thanks to his appearance on RockWiz last weekend. Further returning albums this week are The Angels “Greatest Hits” (#82), Paolo Nutini with “Caustic Love” (#85), “21” for Adele (#89), the self-titled Sol3 Mio album (#90), ‘Like a Version Vol.10’ (#96), and “Rocket Man: Definitive Hits” for Elton John (#97), whilst “Sticky Fingers” for The Rolling Stones drops twenty-four places to No.94 and picks up a Gold (●) sales certification.

Former Australian Crawl lead singer and solo artist James Reyne debuts at No.78 with the new EP “James Reyne & The Magnificent Few”, who are touring together from this past week until the end of September and this is James’ first entry since “TCB” hit No.32 in April 2010. The final entry of the week coming in at No.99 is the self-titled third studio album for US melodic hardcore act “Being as an Ocean”, which becomes the bands first ARIA Albums chart entry.

Written, Compiled and Researched by Gavin Ryan.
Posted by DjPaulT at 2:28 PM 0 comments